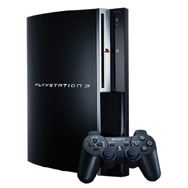 I had been looking for something like that for a long time, some hard data on the power consumption of the new model of Playstation 3 (40GB that was released in November 2007)

So here it is : New revisions of Playstation3 and Xbox

The summary, it will go up to 157 in usage, and stay around 130 at minimum usage. It is a definite better looking deal than with the previous models that could end up to 200 Watts power consumption under load. Yet you still have a lot to gain to turn it off whenever you don’t use it.

How does it compare to everything else ? A rather mid/high end desktop computer such as the one I use in my home (geforce 7800 GT, amd64 dual core cpu, mid tower, a 21″ CRT) would be close to 200 Watts in charge including the CRT monitor. Of course assuming you didn’t go crazy with SLI, quad cores and the like. My current laptop is closer to 50 watts in charge, 20 watts idle (dual core intel cpu, geforce 8500 class gpu, integrated LCD). So whenever I’m not doing anything computing power hungry like typing this note, I would use my laptop and shut down my desktop computer.

Anyway a PS3 is still closer in consumption to a mid end desktop computer than an electronic appliance (if for example you bought it to watch blu ray discs). Hopefully they will still work to improve that in the future with the introduction of the 65 nm or less versions of the chips that would consume less energy (the current 40GB still uses 90nm chips).

The Wii from Nintendo is still unbeatable in term of power consumption, but of course if things were just interchangeable the world would be simpler..